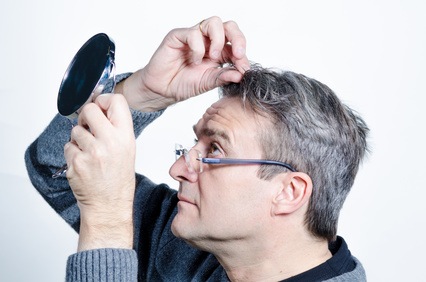 We try to cover all areas of hair loss on the Skalp™ Micro Pigmentation blog. We have discussed the hereditary issues of conditions such as male pattern baldness, illnesses such as alopecia, and how lifestyles can actually increase the problem of thinning hair. But there is one trigger that we rarely confront and that is about an obsessive behaviour where the goal is to actually remove your own hair.

Trichotillomania is the scientific name for the compulsive pattern of pulling your own hair out. We tend to joke or speak half-heartedly about times when we have been so angry or frustrated that we feel like pulling our own hair out. This real illness, sadly, is far from funny and affects millions of people across the world.

Whereas the majority of people would not consider pulling their own hair out (thinking about it actually makes me shudder!) the act of pulling, for the victims of this condition it can offer a sense of relief from diverse emotions. The obsession about the presence of a certain texture, colour, size or location of their hair may also end in hair pulling. When this action takes place frequently, a pattern of behaviour is created which is difficult to break. The key to breaking it is identifying the triggers and specifics of the pattern.

It is not a widely known condition because it is a behaviour which takes place in private. Individuals are often well aware of what they are doing and at the same time feel ashamed of their actions. Over a long period and in extreme circumstances, hair pullers begin to see large patches of hair loss which they will try to hide – again in shame. It is unlikely these negative feelings alone will end the behaviour.

Professionals consider the best form of therapy for Trichotillomania is by using cognitive behavioural therapies. The two approaches most widely used are “Habit Reversal” or “Stimulus Control”.

The first phase of this therapy is awareness training whereby the patient comes to understand how, where and why it is done. This includes such specifics as which hand, which fingers are used etc. From this analysis the patient will hopefully get a good idea as to the warning signs before they are about to start hair pulling. The next phase is to create a competing response. This is a response the patient would make to prevent them from pulling their hair. For instance, this could be, when they are aware of the warning sign or trigger, they turn their hand into a ball or place their hand face up in their lap.

This method focusses more on prevention in general. The goal is to eliminate the environmental cues. So for instance, if a trigger is a mirror, then the therapy would aim to reduce the amount of mirrors within your immediate environment. The patient would also attempt to increase those cues which make it less likely.