Now technology can put hairs on your head! 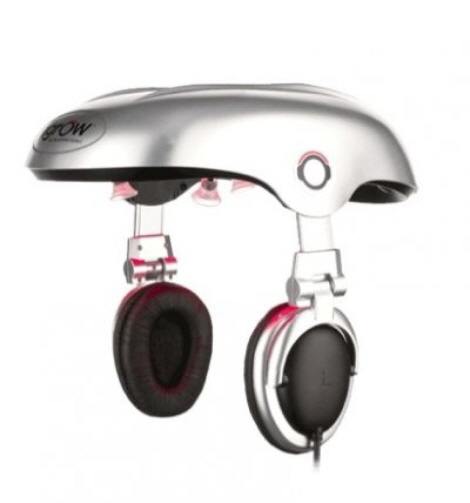 Yes, I suppose someone had to think of it sometime. We have tried, medication, herbs and vitamins, transplantation and wigs – now the boffins and their computers are putting in their 10 pennyworth by introducing a brand new technological appliance that you can wear which actually (so it says) will have your hair growing back in less than 6 months!

It all sounds a bit too science fiction and a bit too much too good to be true but the fact is the iGrow Hair growth system which has been developed in the US (where else?) has actually been passed for sale by the FDA (the Food and Drug Administration agency) which is a department within the US Health and Human Services. So we shall delay disbelief for the moment.

A cross between a hi-fi and a bicycle helmet

To look at the iGrow appliance you will see it looks like a set of headphones with a roof – and true enough you just need to put it on your head. Apparently you can carry on your everyday activities without worrying about it being there. Though it does look a little like you have forgotten to take your cycle helmet off or for some reason you have decided to buy a neat pair of headphones which also comes fully equipped with safety gear. Instead of listening to the latest house, garage rap or acid mash-ups you will be actually receiving red light laser therapy.

But joking aside with its backing from the US authorities and the claim that it has no side effects it is something that definitely cannot be ignored. The makers have thought long and hard about the design and what will be most comfortable for the user. Those things that look like headphones? They are headphones. All the therapy takes part in the helmet itself – the makers added the headphones so you could listen to your favourite music while having your therapy session.

How the therapy works

This laser therapy is of course non-invasive and issued at low levels while employing a red light technology. The makers say the rays strengthen hair follicles and rejuvenate cellular rejuvenation. LLLT (or low level laser therapy) is aimed at men with hair loss described in the Hamilton-Norwood Hair loss scale between 11a and V. This really pinpoints men with receding hairlines and medium hair loss which may have resulted in a bald spot on the crown.

This type of laser therapy apparently is not new and has used as a form of treatments in hospital settings with cumbersome machinery for many years in the US. The difference is now it can be used so easily and it is portable. Allegedly.

The makers claim that you just need to use iGrow for 25 minutes three times a week in order to be seeing real changes after 16 to 24 weeks. Retailing for $695 iGrow is on sale now in 40 countries and can be bought directly off their website.

Is this just another gimmick? Watch this space!

Hair, and hair problems are our business. To learn more about Micro Pigmentation click here