The sport where baldness is a definite asset! 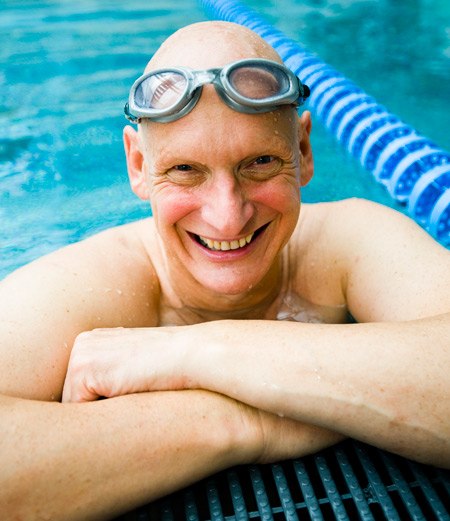 To be proficient at you favourite sport you will probably ensure you have all the right things to wear, the tools, bats, balls and extras to practice and probably build up your physique (or slim if you want to be a jockey!) to ensure you are the first thought that winning line. But there is one sport which recognises the fact that if you have a bald head you have a distinct advantage.

I am of course talking about swimming. It is now accepted that the bald head is super-effective in streamlining the body as it courses through the water. Those extra mille-seconds could well mean the difference between first and second in the Olympics and whether those unique records for each stroke are broken.

Nowadays it is highly recommended to wear swimming caps to help you fly through the water but the first person in the UK that everyone seems to remember is Duncan Goodhew. Now a motivational speaker and media personality Duncan and his bald head first came to prominence as a schoolboy in the 1976 Olympics when he took part in the 100 metres breaststroke. In 1980 he went onto win a bronze medal at the Moscow Olympics.

Many people do not realise Duncan did not shave his head for extra speed – he suffered from hair loss from an early age. When Duncan was just 10 years old he slipped from a rope on a school assault course and ended up crashing into a tree. The result of the accident was he lost all his hair and it never grew back. So there you go – every cloud etc. etc. Today he still remains one of our great sporting personalities.

But to the swimming fraternity bald is definitely beautiful. As well as going bald on top, swimmers try to trim off every inch of their body of hair. The fact is it was Australian swimmers who revolutionised the sport in 1956 at the Melbourne Olympic Games when they arrived on the blocks without hair. Their great showing in the results meant people took them seriously.

The other great event that sticks in people’s minds is when German Swimmer Werner Lampe shaved his head and won bronze in the 2000 metre freestyle at the 1972 Olympics. Perhaps it shows how much fashion, culture and trends have changed by the fact that – much to everyone’s amusement at the time – he wore a wig when he went to collect his medal from the victory stand!

Need a bit of speed – a bald head will get you there faster!