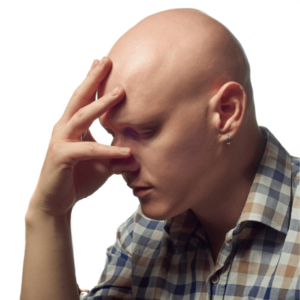 Are you affected by Alopecia Universalis & Alopecia Totalis?

There was good news this week when a report revealed that there are hopes for a new treatment for two for the most severe hair loss conditions – Alopecia Totalis and Alopecia Universalis. A pharmaceutical company based in Chester County, Philadelphia has filed an application with the US authorities (the Food and Drug Administration) to begin the testing of a new drug for Alopecia on human candidates.

There are three forms of Alopecia: Areata, Totalis and Universalis.

This form of alopecia causes bald patches on the scalp and can lead to complete baldness of the head.

Totalis affects the scalp, eyebrows and eyelashes. It can also cause nails to become brittle and ridged. It is believed that this condition is genetic and that long term chronic stress can trigger it. Currently it is treated with immunosuppressants which calm the activity of the auto-immune system down, but they can have severe side effects such as increased susceptibility to infection and links to cancer.

Alopecia Universalis is the most severe form of the condition as it results in total loss from all parts of the body. Scientists have found that sufferers have a genetic mutation in their chromosomes which is present from birth. It may not appear until later in life and is notoriously difficult to treat. The current treatment is a topical immunotherapy but has a low success rate (40%).

The proposed medication – at his time simply titled ATI-50001 is to be used used orally.  Dr Stuart Shanler, the chief scientific officer at the pharmaceutical company said to the Philadelphia Business Journal: “We look forward to developing ATI-50001 as a potential oral treatment for these severe phenotypes of alopecia areata.”

Scalp Micro Pigmentation offers a great service for people struggling with hair loss or who just want to join the bald fashion trend and look their very best. Trained practitioners apply pigments to the scalp so it appears as if you have a full head of hair –