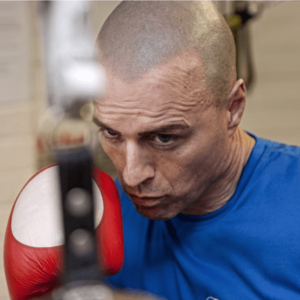 Paul Connolly was already a professional fitness instructor and a respected author when he first found Skalp®. A tough childhood had given him a passion for boxing and a strong desire for keeping in control of how he looked.

He had certainly pulled himself up from nowhere and did not allow anything to hold him back. His schooling had not been the centre of his world when he was a child and he lived through harrowing experiences at the children’s home. Consequently, he left education more or less illiterate. But amazingly, he taught himself to read at the age of 25 and subsequently wrote his biography, the bestseller “Against All Odds”. This was followed by a sequel “Beating the Odds” in 2014 which highlighted how he overcame his demons and became successful.

The importance of hair loss

As his books sadly show, Paul’s early life was very traumatic and hair loss to some may seem a very trivial worry considering the other issues in his life he had to contend with. But the fact is, Paul’s presentation was highly important to him – his image defined him. As well as being important in his profession as fitness instructor, his image was his motivator, it gave him the strength to keep fighting.

Like many guys, he used various solutions to mask his thinning hair. He found that by shaving his hair in certain ways (in the styles of the times) it hid the hair loss. But he could only do this for so long. Eventually it became clear that he was kidding himself and he needed something else.

When he first heard of Skalp® he was sceptical, but he decided to contact them and was glad to find the consultants very approachable and very helpful. However, it was the visualisation which finally won him over and from then on he was hooked.

Paul was impressed with the treatment and amazed at how the difference of a hair line made to his appearance. He found that even the closest people to him (his wife) could not see the difference between the tattoo and his real hair. Paul admitted that his friends were as sceptical as he had been before he had the treatment, but afterwards they were truly shocked at how good it looked. Even more than that, Paul has said that it has also given him a boost in his confidence.

Scalp Micro Pigmentation offers a great service for people struggling with hair loss or who just want to join the bald fashion trend and look their very best. Trained practitioners apply pigments to the scalp so it appears as if you have a full head of hair – but cut fashionably short.