The 7 Stages Of Male Pattern Baldness

A Review Of The 7 Stages Of Male Pattern Baldness

In today’s world, men like to take care of themselves and our hair plays a big role in how we feel day-to-day. Male pattern baldness is a problem that affects a lot of men but few face up to the fact of it while it happens. This can lead to trying to do something about it when it’s too late. Losing your hair comes as a shock, no matter how prepared you might be.

Men rarely feel comfortable addressing their health in any form, much less seek medical advice. The knock-on effect can be pretty big if a problem is completely ignored. This is especially true with hair loss. The Norwood scale exists to help men understand the different stages of male pattern baldness. This makes it easier to manage and cope with changes to hair density. Below are the 7 stages of male pattern baldness to help anyone worried about losing their hair.

While some may blame genetics, stress, smoking, and others may blame hormones like Dihydrotestosterone or DHT for short. The bottom line is men are never too young to start losing their hair.

How quickly and at what rate you lose your hair will depend on several factors. 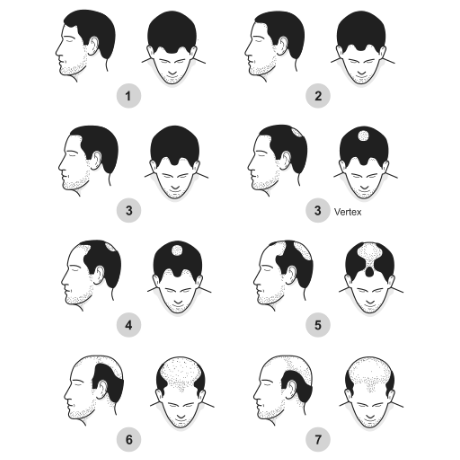 There is very light hair loss in the first stage. Thinning around the temples might begin to show, as well as around the hairline. In some cases, there may not be any seen at all. Some might spot this or simply ignore until it reaches the next stage. 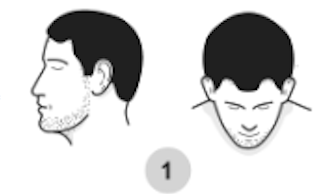 This is when hair loss will start to become noticeable. The second stage of male pattern baldness progresses to highlight a receding hairline. It will take place above the upper brow and around the temples. This is another classic sign that male pattern baldness is on the horizon when you see the appearance of a widow’s peak.

Another sign may creep up on you from behind, the dreaded M-shape or horseshoe so commonly associated with hair loss begins to take shape. Although it alters the shape of the hairline, any loss is relatively low at this stage. 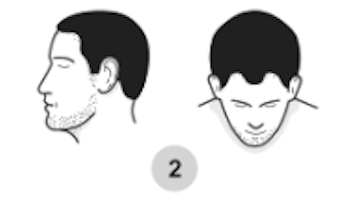 It is now that the baldness becomes visible on the scalp. Hair in the temple now recedes to the point where there is little or no hair there at all. On top of the head, hair becomes thinner and you may start to see bald areas starting to emerge. At this point, it can become more difficult to cover up areas where the hair is no longer present. Some may use hair thickening fibres to fill in thinning areas so they are less visible. Hair fibres can add the appearance of thicker density but are not practical for everyday life as they are not waterproof.

You will already be aware that you are losing hair and the fourth stage of male pattern baldness will confirm it. Larger bald spots will start to appear on the scalp that will create cause for concern. The crown area will start thinning out even more which could create a wide bald area around the vertex or crown of the head. Alternatively, this may occur towards the front of the head deepening the M hairline shape. 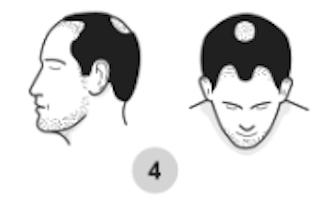 Stage five is where the hair loss becomes far more severe. The thin band of hair that existed between the crown and hairline is now a lot thinner. In many cases, this will happen with men when reaching the age of 50, but it can also occur at a younger age, depending on genetics. This is when you might start to consider treatments such as scalp micropigmentation or a hair transplant. Scalp micropigmentation or SMP will help recreate a permanent hairline on the scalp and remove patches and bald spots. It can recreate the look of hair follicles so that you look like you have shaved your hair not lost your hair. 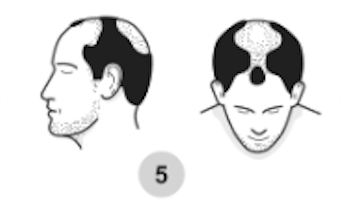 Hair loss now becomes concentrated in the middle of the scalp and the bridge of the hair has disappeared. A horseshoe shape is now prominent along with the remaining hair that exists on the side of the head. Hair around the ear area will also start to thin as this stage continues to progress. Many men decide to shave their hair off at this point as it gives them a more assured look and confidence about how they feel. 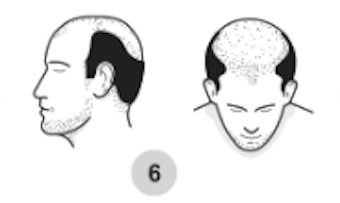 The last of the 7 stages of male pattern baldness. The horseshoe pattern is visible on the sides and the back of the scalp. The top of the head will be completely bald. Hair is typically thicker at the back of the head which is why it is usually the last area to go. However, all is not lost as scalp micropigmentation can still provide a full hairline at this stage. 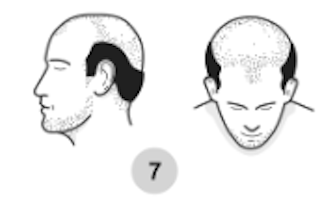 With two-thirds of men experiencing hair loss by the age of 35, male pattern baldness is very common not something to panic too much about. That said, it can harm your confidence and mental health. Therefore, it is best to do your research so you feel more in control and aware of your options at all stages of male pattern baldness.

What should you do if you think you have male pattern baldness?

Breakthrough in Research To Find  A Cure For Male Pattern Baldness

Receding Hairline In Your 20’s? 4 Hair Loss Solutions To Consider

Do Protein Shakes Cause Hair Loss?