Top Reasons Why Bald Men Look Better – According to Science 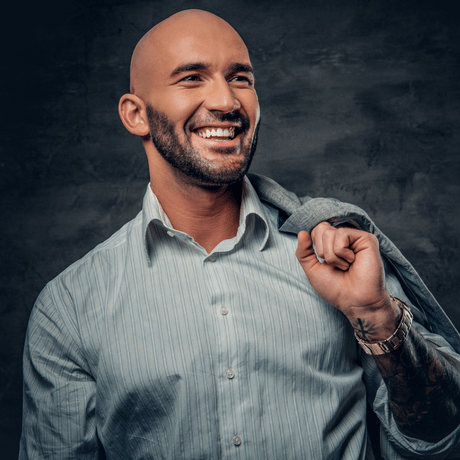 Youth. Virility. Masculinity. If the marketing behind the multi-billion pound hair loss industry is to be believed, those desirable traits are inextricably linked to follicular density. Or, in other words, real men don’t go bald.

But wait – what if I told you the reverse is true?

What if I told you that with the right tools, going bald might be the best thing that ever happened to you? Read on to see the top reasons why bald men look better

Roughly one-quarter of men begin balding by 30 – an age at which no one could be considered “old” – some guys start shedding in their 20’s. By 60 years of age, two-thirds of men are bald or show clear signs of balding.

Male pattern baldness is strongly correlated with a genetic predisposition – men whose fathers went bald are more likely to experience hair loss themselves – in other words, baldness is built into your genetics and there’s not much you can do to stop it.

The science behind hormonal causes of hair loss is complicated and contentious. It is a general consensus that male pattern baldness is caused by the conversion of testosterone – the male sex hormone – to dihydrotestosterone (DHT).

However, to delve into a sufficiently in-depth discussion of that process would be beyond the scope of this article. Instead, let’s further examine why balding is a non-issue and something that can actually improve your looks.

Sure, it’s a bold statement, but it’s true – and backed by science!

Redefining Masculinity from the Head Down

One of the top reasons why bald men look better  is dominance. An attribute to which we agree has positive connotations – is almost universally associated with masculinity. Far from appearing submissive, men with shaved heads are often perceived as being more, not less dominant – demonstrated in a series of three studies performed at the University of Pennsylvania.

59 students were presented with photographs of 25 men, just under half of whom had shaved heads. Numerous controls, including minimal facial hair, dark-coloured backgrounds, and a lack of visibly balding men, were implemented to discourage bias.

Study participants rated the men pictured in terms of agreeableness and dominance, perceiving those with shaved heads as the most dominant.

In the second study, researchers presented randomly to participants photographs of four men with hair – then, photographs of the same subjects, whose hair had been digitally removed.

The researchers found that men whose hair was digitally removed were perceived not only as more dominant, but more masculine, confident, and taller.

Study three was undertaken with a number of objectives. Would men whose hair was thinning, but unshaven, be viewed as more dominant than those with a full head of hair? And, could such men improve their social status by shaving their heads?

Rather than rely on visual perception, study participants were given a fictional description of a man named John – described as having thinning hair, or being bald.

Researchers found their fictional character was, with thinning hair, poorly perceived in every regard, whereas “John”, when described as bald, was more highly rated in all categories:

In other words, the a strong, virile, trend-bucking alpha male, capable of taking charge.

Why are Bald Men Perceived as More Dominant?

One of the researchers – Albert Mannes – who led the studies – postulates that the favourable perception of men with shaved heads is based on strong cultural associations.

In Western society, “…shaved heads are often found on men in traditionally masculine professions,” says Mannes, “so dominance may emerge through stereotypical associations with these figures.”

This is further reinforced by successful bald male celebrities in the public eye. The Rock, Bruce Willis, Michael Jordan, Vin Diesel, and Jason Stratham – to name just a few.

Putting that theory to the test, Mannes shaved his own head, noting increased deferentially from others.

From a theoretical evolutionary perspective, many primate species exhibit progressive hair loss on the scalp following adolescence. This leads some researchers to believe that a more visible forehead conveys maturity, status, and physical strength.

In the end, what counts is perception. What we have learnt is that bald men – particularly those who shave their heads – are seen as stronger, taller and more masculine.

The take-home message, then, is to give in to your baldness, and shave your head – thank me later.

Keen to shave your hair but reluctant to wave goodbye to your hairline? Check out scalp micropigmentation hairline restoration treatment here. It’s the ultimate non surgical treatment that gives you a freshly shaven full head of hair- even if your completely bald!