Why is DHT’s Role In Baldness Important? 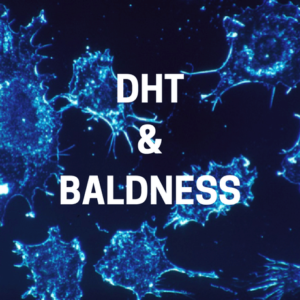 The entire concept of hair loss can be an intimidating one if you are unfamiliar with what is going on. There have been plenty of articles in the press recently mentioning DHT’s role in baldness.  However, few have delved deeper into the facts to help people understand it fully. So, today’s post will demystify the concept of DHT so that you can understand.

We’ll start with the basics and provide a definition of DHT. Dihydrotestosterone is a sex hormone and a chemical derivative “modified, more active form” of testosterone. It is synthesised from testosterone by a steroid and metabolic-related enzyme that goes by the snappy name 5α-reductase.

DHT plays a major role in male growth, development and regulation as it’s produced primarily in the prostate, testes, adrenal glands and scalp. This is the hormone responsible for all the major developments that take place during puberty;  voice breaking and facial hair growth. While DHT is responsible for plenty of other good things such as the development of sexual characteristics. DHT is also named as a common cause of male pattern baldness. As it is far more powerful than testosterone, if your body is converting it at significant rates then you may quickly see the effects.

The link between DHT and baldness is very real. Specifically, DHT’s role in male pattern baldness is clear. However, it’s not quite as black and white as you may think. While higher levels of DHT in the body will often lead to hair loss, this is only when the individual has a genetic sensitivity to the steroid.

How exactly does DHT cause hair loss?

This means that any genetically-susceptible hair follicles will produce extremely weak and thin new hairs. With every hair cycle producing progressively finer hairs, this weakens the shaft and the hairs will eventually just stop growing. a shorter growth cycle and/or a longer resting cycle. The reason that male pattern baldness has such a distinctive pattern is that the most susceptible hair follicles are located on the front and top of the scalp. 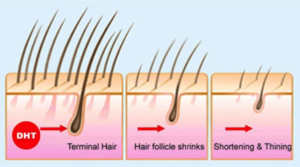 Is there a way to treat hair loss caused by DHT?

There are a number of different approaches you can take to treat this issue when DHT has caused male pattern baldness. You can either tackle the problem at the root by inhibiting the DHT production and targeting the enzyme that converts testosterone into DHT. This is best done through medication such as Propecia or Minoxidil which will enhance hair regrowth and increase blood flow to the hair follicle.

However, it only remains effective whilst you are taking the medication which may not be practical in the long-term. Some people will not be able to take the medication while others may find that the side effects prove too intrusive in their day-to-day life.

A more permanent and less intrusive form of treatment would be scalp micropigmentation. This is an extremely cost-effective route that focuses on the aesthetics to offer guaranteed results. Both men and women can take advantage of this treatment which makes it particularly handy as DHT-related female hair is often far more complex which makes it difficult to work is the best treatment option for hair regrowth.

The influence of DHT usually manifests itself in hair thinning as opposed to significant or sudden hair loss.  Scalp micropigmentation is the best course of action as it replicates the natural appearance of hair follicles. The treatment gives the illusion of real hair without the risk of a surgery or medication falling short of expectations.

At Skalp, we use natural pigments to simulate a full head of hair. The treatment works for those suffering from mild thinning all the way to full baldness. As an extremely flexible treatment, scalp micropigmentation suits all skin types and colours. Our sophisticated technology matches your follicle colour for a seamless blend.

Keeping stress to a minimum and a healthy diet are positive ways to minimise hair loss, but they won’t prevent it entirely. We hope that this post has given you more insight into DHT’s role in baldness. And hopefully and the best way that you can tackle the issue.

We would always recommend speaking with an expert before going ahead with any treatment. This way, together we can work out your suitability, and discuss individual factors including medical history and personal preference.

If you’re concerned about DHT’s role in baldness and hair loss or hair loss prevention, contact Skalp today. We can explain exactly what scalp micropigmentation involves and show you some photos of clients Before and After treatment. This will also give you the opportunity to talk through any concerns as well as your personal treatment preferences.